Sewing was Shelli Scott’s passion from an early age. She started when she was 7, living in Cleveland when an elderly neighbor across the street would watch her after school.

She learned to sew from her neighbor as they would make pillowcases together as an activity. Scott said the pillowcases were for her security pillow and would be made and changed out like dresses on a doll. It was an early start for the woman who now has her own clothing line and is working out of The Accelerator space in Newburgh.

A graduate of the Fashion Institute of Technology, Scott freelanced as a seamstress for years to polish her craft, working in places like the U.S. Open tennis tournament on player sportswear, during Fashion Week doing alterations and in Broadway theaters where she made clothing, including completing recreating the full set of costumes for the Fantasticks.

She’s worked on both the design side and the production side of the industry. One of the highlights of her career came in 2002 when she was a seamstress supporting a Maybelline commercial with actress Zhang Ziyi, whose film credits include Crouching Tiger, Hidden Dragon and Rush Hour 2. Ziyi was choosing her dress before filming and selected a piece Scott had designed and produced. The dress was hanging among a rack of burgundy garments from all the top designers who had hopes of being selected.

“She went straight for the dress that I made,” Scott said. “That was the dress that she wanted to wear and I could not believe it. She was flipping through them and stopped at mine. I was so excited!” Today, the Monroe resident has her own women’s apparel clothing line, self-titled as Shelli Scott, which she opened in March of last year. Since June, she has been working out of her garment shop at The Accelerator’s building at 605 Broadway in Newburgh. When she was looking for retail space, her business advisor at the Mid-Hudson Small Business Development Center recommended that she consider space with The Accelerator.

“I physically make everything myself,” Scott said. “And it all holds true to my heart. When somebody puts something on that I made, it is such a sense of satisfaction. I love it when they say, ‘I need to have this.’” Her website (www.shelliscott.com) explains that her designs are “Bold, feminine and confident. Sophisticated with a splash of sexiness.” 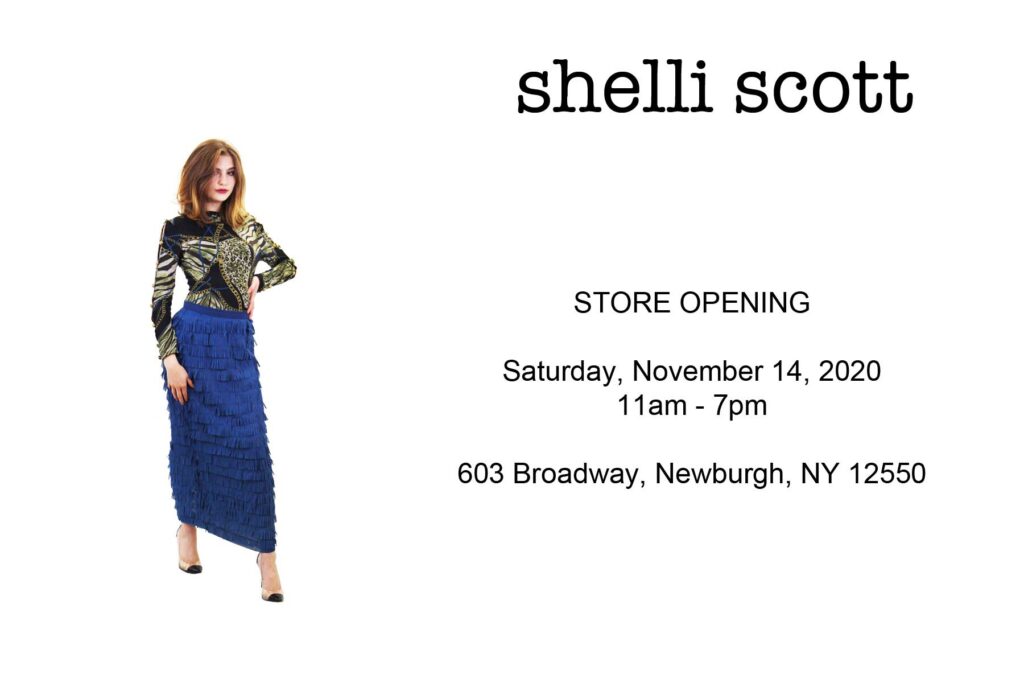 Her garments are made-to-order, well-crafted and built to last. The business, which makes small production lines of clothing that are sold to individuals from their as orders, is in its very beginning stages, Scott said. For now, though, she is developing her marketing strategy. First, she is working to get her name out across the garment industry.

Designers sometimes solicit people in the entertainment industry to wear their creations. Those entertainers are then seen by the media and the public and publicity for the clothing line is generated. Scott is excited to have signed her first entertainer and is in the process of landing her second.

Recently, two high-profile entertainers have been spotted wearing Shelli Scott: Ciera Payton from the hit Tyler Perry TV series The Oval and Gizelle Bryant from The Real Housewives of Potomac. In five years, Scott would like to have three seamstresses in her shop.

Eventually, she said, she hopes to sell her product wholesale so her pieces make their way into retail stores. “Building a fashion line means building a brand while simultaneously building a business, marketing that business and making connections for that business,” Scott said. “So, there is a lot to do. But, with the help and support of The Accelerator I will be able to continue to advance my business and be successful.”