The Accelerator Hosts Hemp Round Table for Growers, Industry Leaders 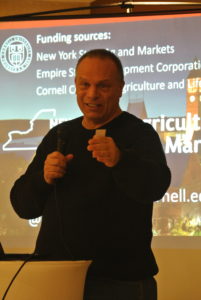 The Accelerator Managing Director Vincent Cozzolino addresses crowd of hemp farmers and processors at the organization’s round table event on February 27, 2019.

NEW WINDSOR, N.Y. (March 1, 2019) – The Accelerator, a certified New York State incubator focused on bringing manufacturing back to the mid-Hudson Valley, recently hosted a gathering of more than 100 hemp growers and industry leaders to discuss the latest information on industrial hemp research, regulations and growers’ experiences. “Growing Industrial Hemp – An Update on Growers’ and Processors’ Experiences” was held on Wednesday, February 27, 2019, at La Casa Vicina in New Windsor.

Powered by the Orange County Industrial Development Agency (IDA), The Accelerator is a regional economic development team that focuses on start-up businesses. Recently, The Accelerator announced plans to launch a cannabidiol (CBD) incubator in Warwick, which will include several farms and companies operating in Orange County. Touro Medical College has partnered with The Accelerator to serve as its center of excellence. The increased interest in CBD farming is due, in part, to Gov. Andrew M. Cuomo’s 2018 State of the State proposal to establish New York as a national leader in industrial hemp research, production and processing.

“Our job, in general, is to create economic development industries that don’t exist – first in Orange County and then the region – and bring those industries here. So, in the past, we’ve done things like fashion, medical, and http://aic.org.uk/cialis-generic/ artisan food manufacturing, and now CBD. We think this is an amazing opportunity for economic development,” said Vincent Cozzolino, Managing Director for The Accelerator and Orange County IDA. “It seems like it’s early that we’re in this industry, but it’s only early because we’re in New York and Orange County. It’s not early in Oregon, it’s not early in other places in the county, so we’ve really got to get this moving.”

Smart provided an overview of hemp farming, including licensing, regulation and crop harvesting. He has conducted several trials to gain insight into the best practices for growing and cultivating hemp. Smart noted the differences between hemp and marijuana.

“It’s not really a botanical difference, they have been interbred for decades; they are the same species cannabis sativa. There is a legal regulatory difference related to the amount of THC. It’s also a difference in terms of how the crop has been bred over several decades,” said Smart.

“Hemp has been bred to produce a large amount of grain, we have cultivars that are optimized for grain production, for fiber productions or, more recently, for CBD production. Then, we also have cultivars that have bred for high levels of THC. The testing for THC and the growing conditions that may affect THC are critical for growers,” he added.

Following Smart’s keynote address, Rogowski, Wessels and Ford shared their experiences in farming hemp and answered questions from the current and aspiring hemp farmers and processors in attendance. Sewitt concluded the event by sharing insight into his experience as a hemp processor.